The Gorlaeus Laboratoria, room S0.08a is since many years the official place of the board of the CDL. Well, since many years? Spektaculair is the 12th board that is fully located in the ‘hok’ (boardroom). A lot of other rooms have been occupied by the CDL board over the years. This is also the case for the course Chemistry. Here, we will provide a short history of the rooms and buildings that the CDL and Chemistry Students have studied/lived in since our establishment.

The old church at Rapenburg was the first permanent housing for Leiden University shortly after its establishment. This building is still in use to this day by the University and we know it as the ‘Academiegebouw’ (Academic Building). The University grew from here and expanded throughout the city. Until the middle of the 19th century, all education and research buildings were centered around the Rapenburg. The pharmaceutical research was done at the Papengracht, number 4. The chemical research concentrated itself since 1856 in the current Kamer Ohnes Building, which was then called “Fysisch, Chemisch, Anatomisch en Fysiologisch Laboratorium” (Physical, Chemical, Anatomical and Physiological Laboratory). This building was established by a Chemistry professor, Van der Boon Mesch. Encouraged by unhappy students that complained about the poor working situation in the old buildings in the city, he made sure the minister financed a new laboratory at the Kleine Ruïne (established during the ‘Kruitramp’ [gunpowder disaster] of 1807). This building was the first laboratory that was designed with the requirement that science experiments could be conducted which required a specific design.

By the end of the century, the views were already changed and they decided that they wanted to place the chemical branch just outside of the busy city. That is why they started building a new Laboratory for Organic Chemistry in 1896 on the Hugo de Grootstraat. This building, completely built in neo-gothic style, was doubled in size in 1910 to a complex with more than 6000 squared meters. The University and the course Chemistry grew so much during the 50s and 60s that a new accommodation had to be sought. A new gigantic complex was built in 1963 even further from the city, in the upcoming neighbourhood Leeuwenhoek, easily accessible along the Rijksweg A44. The building on the Hugo de Grootstraat was left for good in 1968. It is not even a property of the University anymore since a couple of years ago and it has been renovated to hold luxe apartments. 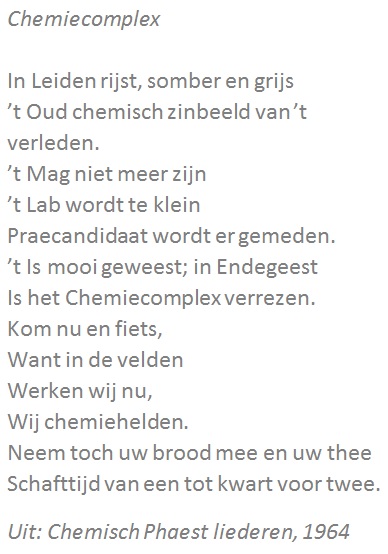 The Gorlaeus Laboratoria were the base for what later became the Bio Science Park. It was the aim to have six towers with laboratoria that were accessible via a circular lecture building. The current situation shows what they realized. Only one of the towers was built for Chemistry and another for Physics. This is presumably the building where the CDL got her first room, but the archives are not very clear about this.


It is not very clear when the CDL got her very own boardroom. In the 70s and 80s, we were situated on the tenth floor. They even held General Members Meetings here, dressed in a chic turtleneck. The CDL moved at one point to a new location, closer to the ground and the students. We do not know when that exactly happened, but what we do know for sure is that in 1996, during our 14th lustrum (Rob van Waarde was praeses then), the CDL was located in LCP19. Nowadays we know this room as our archive, tucked away deep in the chambers of the Gorlaeus. The tradition to leave hand prints on the walls was originated here. This tradition, now at rest, can be seen on the two filing cabinets in the current boardroom. The hand prints of the 90s can still be found in the basement.


Because the basement did not conform to the strict fire safety regulations, the faculty wanted to move S.V. LIFE (also our neighbours at that time) and the CDL. The bar also had to be more safe and professional. The small lecture rooms beneath the canteen would be changed to boardrooms. Major Line was the first board that was situated above the ground in a room that is now a part of the Science Club. When the plans again changed for the bar, the CDL, and in particular the board Sad Chaos, had to move again. This time they moved to a location that we now know as the CDL ‘hok’.


This was not the last time the CDL had to move. In 2008, when Hatchikidee was the board, the wing was made clear of asbestos. The CDL had to move back ‘temporarily’ to the old boardroom in the basement. Eventually, the board would be located here for more than a year, Kharma moved back to the ‘hok’.


In a few years, we will move to the new building (‘nieuwbouw’).