The start of the CDL

This is the first piece of the HistoriCie that was put into the Chimica Acta Lugduni. Here we will provide an image of what happened at the very beginning of the Chemisch Dispuut Leiden. 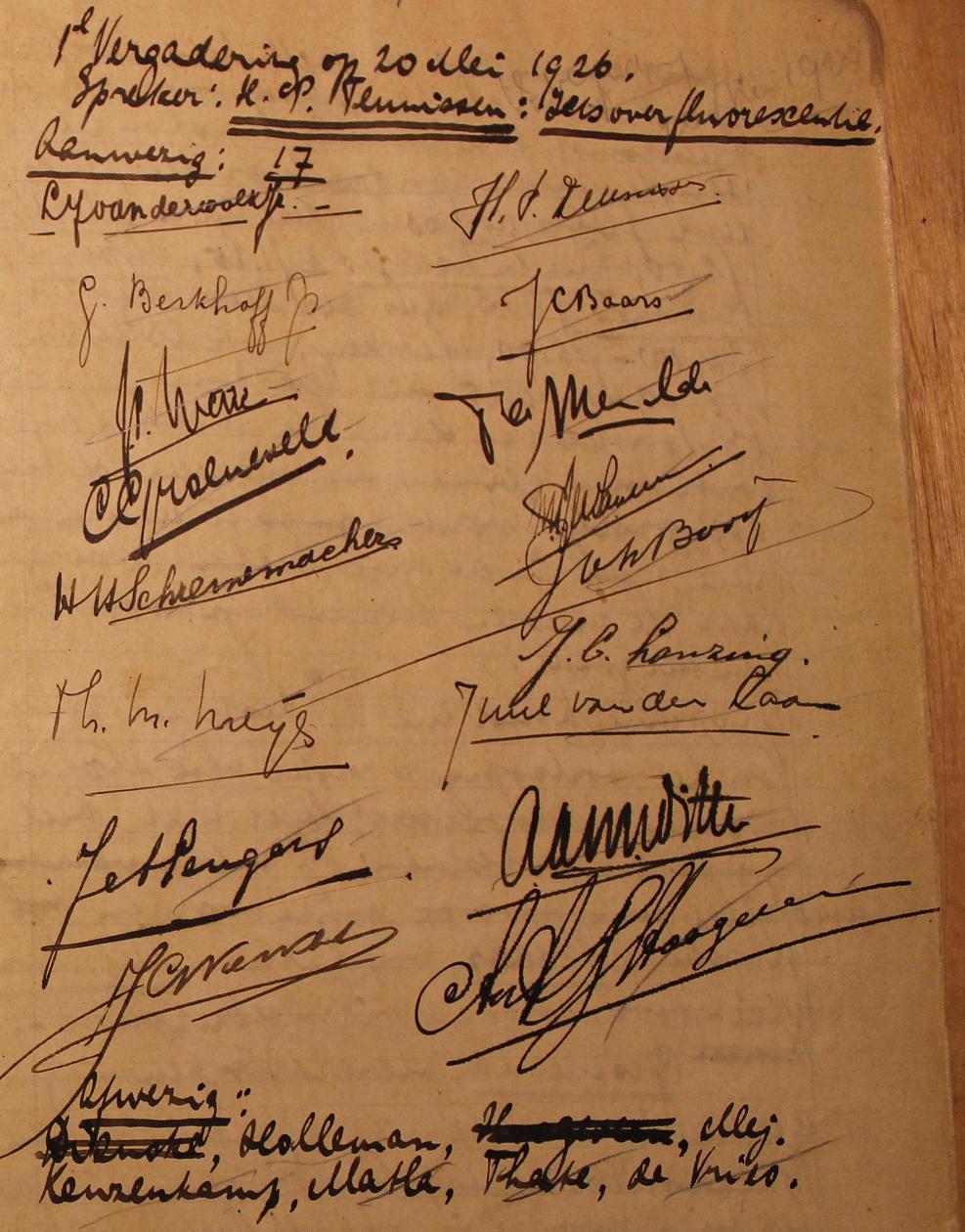 May 20, 1926 is a date that all of us recognize. On that day, the first meeting of the (later named) ‘Physisch Chemisch Dispuut’ was held. If we can believe the first minutes (or notes), the association consisted of 23 members of which 17 attended the meeting. At this meeting, some crucial matters were discussed. The costs of the meeting were set at f. 4.50 to f. 5.00. The contribution was set at f. 1.00 gulden four times a year. In practice, however, it turned out that this contribution was not always kept up to date and during the first years a ‘kerkezakje’ was passed around a few times to pay for the meetings. An association needs a board, so that was also discussed during this meeting. The idea of letting the chair pass its turn in alphabetical order “lijkt niet veel sympathie te bestaan” (is not a lot of sympathy for). It must be said that deciphering the minutes is not always easy. “Niet veel” (not much) could also be read as “wel nul” (zero) or “wel veel” (a lot), which has quite an influence on the meaning of the text. The eventual task division is also not really logical to us. Mr. J.C. Baars becomes chair, Miss Lanzing becomes vice chair and vice secretary, and Mr. Groeneveld becomes secretary and treasurer. “Gezien de dwergachtige afmetingen van het thesauriesambt” (because of the small tasks of a treasurer), it is not necessary to separate the tasks of the secretary and treasurer. The first room that was used by the association was given by Miss. de Beer. Because of her culinary contribution to Prof. Schneide, the small classroom was made available, “onder uitdrukkelijke voorwaarde dat een eventueel stilleven (als: gebakjes, aan de ramen klevende en gordijnen in thee gedrenkt) indien mogelijk vermeden worden” (under the condition that a possible still life is avoided). If you are a small association that is still in their child years, you have to rely on the small things. Our association did not even have a name yet at that time. Everyone was asked to help think of a beautiful name. We actually still see that (a sign that history repeats itself). When a name has to be thought of, we do a contest. The eventual choice of the word ‘dispuut’ as a name for an association seems in this time unusual. In light of what the association did at the time, it is actually very fitting. A ‘dispuut’ still means an informal disagreement. In somewhat older Dutch, ‘dispuut’ also meant as much as recite, colloquialism. This, as we shall see, is very typical of the then prevailing view of the newly established ‘dispuut’.

From meetings to an association

In the beginning of the Physisch Chemisch Dispuut there was only one kind of activities: the meetings. A meeting like that can be split into two parts. First, there was a short meeting like we are used to where things were discussed and decided. After this, one of the members was allowed to give a lecture to their fellow members. These lectures were also fully minuted in the beginning, but later on, only the subjects of the lectures were found. A small selection of the subjects that were discussed: “Electrochemie aan vaste stoffen” (Electrochemistry on solids) by J. Lens, “Over twee methoden ter bepaling van moleculaire forms” (About two methods to determine molecular forms) by L.W.J. Holleman, “Theorieën in verband met het periodiek systeem” (Theories in connection with the periodic system) by R.S. Tjaden and during the first meeting “Iets over fluorescentie” (something about fluorescence) by H.P. Theunissen. The first annual report showed that students even then did not pay as much attention as you would have guessed since they are enthusiastic members of the new association, or the lectures were very hard or the lecturers were a little boring. “Iets met fluorescentie” (something about fluorescence) does not give the impression of an interesting lecture. The first mention of a committee was found in 1929. As it is not easy to give lectures in front of a group of people, a committee is set up with the aim of “den sprekers raad te geven bij de keuze en indeling hunner voordrachten” (giving advice to speakers about the choices for their lectures). 1929 is also the year that the first excursion took place. In the morning, they visited the “Clichéfabriek”, a lithography company that was burned down in the 70s. In addition, in the afternoon, they visited the dangerous sulfuric acid company of Ketjen en Co. For the observant reader: this is the company that later becomes AkzoNobel, a company that we have regularly visited the last years. A quick jump to 1930-1931, the first time that professors give lectures during the meetings of the association. Prof. F.A.H. Schreinenmakers is the first one that does this. He gives three lectures about osmosis. However, the members still keep giving lectures themselves. We also come across collaborations with the Chemische Kring (sub-association KNCV) here as well as other study associations. Apparently there was already a lot of cooperation between the (chemical) students even in the 1930s. At the annual meeting of March 2, 1931, the board becomes more recognizable in the modern style: the secretary becomes the ab actis. The chair and treasurer (voorzitter en penningmeester) keep their Dutch names for the time being. 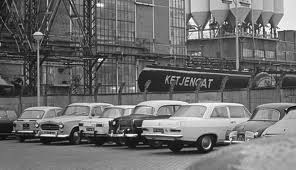 Finally, we would like to share one more important fact with you. You may have noticed that the association was first named ‘Physisch Chemisch Dispuut’. In the annual report of 1931-1932, the following sentences were written: “In het afgelopen jaar hebben er in het dispuut verschillende veranderingen plaats gehad. Het begon het jaar onder een naam van ‘Physisch Chemisch Dispuut’, maar verloor in de loop der tijd het eerste predicaat.” (In the last year, the ‘dispuut’ has undergone some changes. The association began this year under the name ‘Physisch Chemisch Dispuut’, but lost its first predicate in the course of time.) Changing the name of the association was, as they say in poker, a coin flip. There were 18 members present at the meeting. Nine people voted for the change, eight people against and one vote was blank. The chair stepped down because of the change. This shows that the first five years of the association were tense and exciting. Our association had a busy and special childhood.